This past weekend was our youngest son's wedding and although we were a bit apprehensive about a beach wedding and the weather was calling for rain, everything went perfectly.  Our oldest son and his wife arrived in time from Nevada for the wedding (with only a slight airport delay) which was great.  Rain did not appear but it was a bit chilly and windy at the beach.  As my legs are not good enough for long periods of standing anymore, my son arranged for chairs for me and B.  Anna was beautiful and AJ so handsome and of course, I cried alot.  They wrote their own vows and AJ asked me 3 times afer the ceremony if it sounded good.  He is not one to speak in front of people and was concerned that it didn't come out the way he wanted it to.  I told him the vow was great and all that mattered was that he wrote it with love for Anna. 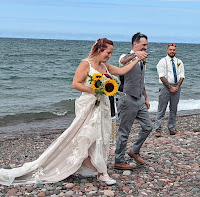 The reception was held at a lodge which we had never been to before and were pleasantly surprised at how beautiful it was.  In fact, we looked into the rates for a cabin to stay there for a vacation next summer. We had a great time at the reception.  B and I did a lot of dancing (something we don't normally do) and we hoped we didn't look too foolish doing it.

All in all, the four of us agreed it was a perfect wedding and a wonderful time with all of us together.  The kids are now off on their honeymoon in Alaska (of which, I am jealous.  B and l always wanted to go to Alaska).  My oldest and his wife left Monday to catch their flight in Chicago to go home.  Unfortunately, their flight was delayed by 2 hours so by the time they finally got to Phoenix, they missed their connection to Reno.  The airline got them a hotel and gave them travel vouchers then they rebooked them to fly out of Phoenix on Tuesday morning to Reno.  By Tuesday afternoon, they had picked up the grandpuppy and gotten home.

As my oldest has a tendency to say when things go this way, "what an adventure we have had!"

Email ThisBlogThis!Share to TwitterShare to FacebookShare to Pinterest
Labels: wedding